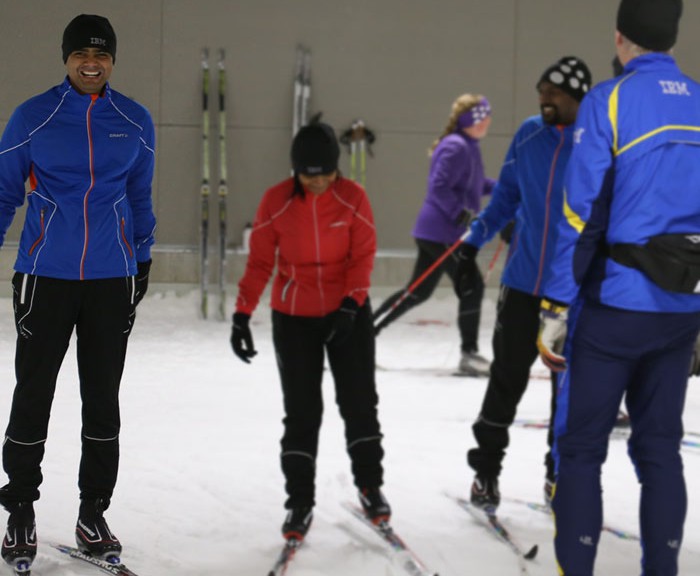 How often does one get into a completely unknown, unimaginable and – if I may say – somewhat scary journey? Well, at least for me, not very often! And that’s probably why I very vividly remember the day and the moment I decided to sign up for IBM’s Diversity Team for the Stafettvasan! Having lived most of my life in India, I had never seen anyone ski and had no idea what the road ahead would be like. But something told me it would be an experience worth cherishing! The idea was to train a group of IBMers who had never skied before and have them participate in the Stafettvasan ski race as the IBM Diversity Team.

Although I had never skied before, here I was signing up to participate in one of the most coveted and challenging skiing races in the world! Was I really doing this?

Days went by and we began with the workouts which were pretty demanding but the team spirit and encouragement from fellow team members kept me going. I soon realized that this journey was not just as unknown and exciting for me and my fellow teammates but also for Bente who had been amazing enough to take up this initiative!

Before I knew it, we were leaving for Göteborg where we would be skiing for the first time ever! As I was sitting in the train with my teammates (who by now were close friends) traveling to Göteborg, I was filled with a sense of inexpressible excitement, fear and disbelief. Upon reaching there, we began to learn the basics of skiing. For me the basics included being able to distinguish between a pole and a ski!

Here I am now a month later, no longer afraid of the cold or of falling in the snow! Enjoying every moment I spend skiing – which includes skiing at -160 C! (It was only a few months back that I considered anything under 100 C as extreme winter!) No longer shy to glide into the skiing lanes where professionals are skiing at 5 times my speed. I am loving every moment of it and building a memory I’m sure I’ll cherish forever.

With the race just a couple of months away, it can only get more exciting from here!!

One thought on “An experience of a lifetime!”